In honor of Mary Fisher’s 11-year anniversary with McClain Insurance, we’re playing “Get to Know the McClain Team.” We hope you enjoy learning more about Mary, what she loves about our community, and her answers to our lightning-round questions.

Tell us about your family, where you grew up and what you were like as a kid.

I was born in Minnesota and moved to Southern California when I was 2 ½, then moved to Hood River, Oregon when I was 12. I consider Oregon home.

I graduated from Oregon State with a degree in Broadcast Journalism and a Home Ec. minor. I guess I was ahead of my time since HGTV was not around back then!

My brother and sister are 20 and 15 years older than me so special childhood memories revolve around weddings and becoming an aunt at age 6! We had a fabulous parks and recreation department and our summers were filled with field trips to the beach, zoo, and museums! Good times!! 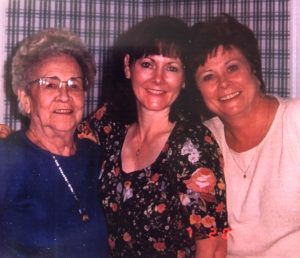 Mary with her mom and sister

I met my husband, Mike, at my oldest niece’s wedding – he was best man and I was a bridesmaid. I caught the bouquet! That was 35 yeas ago on August 28. We have a daughter, a son, and a soon-to-be son-in-law. Our daughter has an Australian Shepherd named Buckley who keeps all of us on our toes! We lost our little Yorkie, Jake, a year ago but we’re not quite ready to replace him yet. 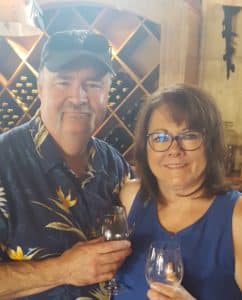 Mary and her husband, Mike

Tell us about working for McClain Insurance.

Family time is important! I miss my extended family and my close friends a lot! When we are not in a pandemic, I like to spend time with them. 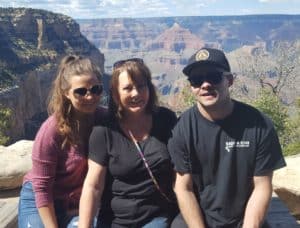 Kendall, Mary and Grant at the Grand Canyon on Mother’s Day in 2019, after Grant’s graduation from Northern Arizona University

We also like wine tasting and road trips. Seeing every national park is on my bucket list!

1. What new hobby or skill would you like to learn? I have always wanted to learn to crochet. I am currently learning all about rain gardens. 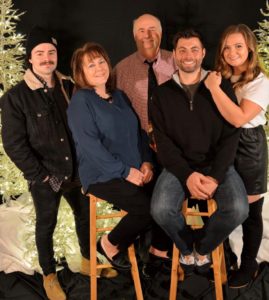 3. What motivates you to work hard? My kids and setting an example for them. I was raised with a strong work ethic and I am proud to say that my kids have one, too!

4. What would you sing at karaoke night? First of all, I don’t sing. I lip sync in the shower, I’m that bad!! If I had to pick a song, it would be “Mama’s Broken Heart” by Miranda Lambert.

5. What’s the most useless talent you have? I can solve a TV/movie crime before the show is half over.

6. What food do you love that a lot of people might find a little odd? Lutefisk and lefse! I’m half Norwegian. And to be fair to my other half, I love Irish whiskey! 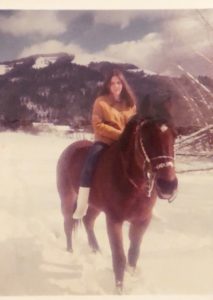 Mary as a teenager on Dusty the horse

7. If you were a superhero, what powers would you have? I have always been a Wonder Woman fan! To be honest, when I was younger, I was often told I looked like Lynda Carter. LOL! So I guess a Lasso of Truth (don’t lie to me!) and deflecting arm bands would be my super powers!

8. What topic could you give a 20-minute presentation on without any preparation? Making gravy!

9. What’s your favorite holiday tradition? Spending time with family! My nephew has been hosting Christmas Eve parties at his home in Bellevue for the past 10 years and it is always a fun time. We like to kick back on Christmas Day and go to a movie. It all changes with adult kids!

10. What pets did you have growing up? When I was born my family had a German Shepherd named Chita who was my personal bodyguard! When I was 7 she developed cancer and died. We got another German Shepherd named Queenie who had been abused and was very skittish. Poor thing. I also had a cat named Keesa which means female kitty in Norwegian. Then we found out she was a he!

11. What’s the most daring thing you’ve ever done? Daring or stupid? I went down a raging river on a raft made of 26 truck tire inner tubes. And I don’t swim!!

We’re so glad Mary is part of the McClain Insurance family! To learn more about Mary and the rest of our team, visit autohomeboat.com/about.