On Sunday, March 8, it’s time to spring forward and set your clocks ahead one hour to mark the beginning of daylight saving time. It’s also time to change the batteries in your smoke alarms.

This reminder is fresh on our minds after McClain Insurance community member Chuck H. wrote to us with the following advice:

After living through the experience of a water leak in my home, I learned some invaluable lessons. It made me reassess household emergency plans, and I found out many things I didn’t know. I thought after 70 years I knew everything!

I have some advice to pass on to other clients. Smoke alarms have saved many lives, but I think we have become so used to them we sort of take them for granted. I did not know smoke alarms need to be tested once a month. I know it’s not convenient, but if it saves a family member is it that big of a chore?

If a smoke alarm doesn’t test out according to the manufacturer’s test procedure, replace it! Smoke alarms also need to be replaced every 10 years. Keep a household log so you know when it’s time to do so.

Smoke alarms have become much more sophisticated and accurate, which is a good thing. They are also a lot more sensitive and vulnerable to malfunction if they are exposed to some household cleaners and chemicals in the air.

Due to the water leak, I had to have our hardwood floors sanded and re-stained. When the flooring crew came in and hung plastic dust barriers up, I specifically asked them if they needed to cover the smoke alarms. They told me no.

We moved out of the house and came back four days later after the staining/finishing fumes had left. The floors looked beautiful! Oddly enough that evening our smoke alarm (which has a voice feature) started saying to test the alarm. We did and it went through its test. All seemed okay. A few hours later the same message went off. My wife decided it must be due to low batteries, so she changed them out. Half an hour later we received the same warning again.

We decided to call the electrician who had installed the smoke/carbon monoxide alarms about two years ago. We told him what happened and he advised us the alarm was malfunctioning and to get another one. He said fumes from re-finishing the floors made the alarm stop working.

Amazingly, after reading the general maintenance section on the new alarm I found out that even hairspray in the air can make it malfunction. Be aware of this, and don’t take that piece of plastic for granted.

Again: Now is the time to change the batteries in your smoke alarms.  Also, make a calendar reminder to test your smoke and carbon monoxide alarms regularly. If the lights are not working something is wrong and you need to replace it. You may SAVE A FAMILY MEMBER!

Thank you, Chuck, for reminding us that a working smoke alarm could mean the difference between life and death.

Fire is fast.  According to Underwriters Laboratories, homes burn much quicker than they used to. About 30 years ago, you had up to 17 minutes to escape a burning home. Today, with the prevalence of synthetic materials in homes, you have about 120 seconds. In just five minutes, a residence can be completely engulfed in flames.

Working smoke alarms give you early warning so you can escape a burning home quickly. According to the U.S. Fire Administration (USFA):

This is why it’s important not only to have a smoke alarm but to maintain it, too.

We recommend changing the batteries in your smoke and carbon monoxide alarms during daylight savings time. This makes it easy to remember to change your batteries every year.

How to Change Your Smoke Alarm Batteries

How do you change batteries in your smoke alarms? Luckily, it’s easy to do and takes just a few minutes.  Here’s how: 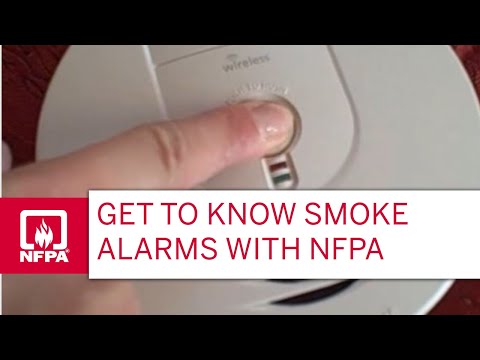 What You Need to Know About Smoke Alarms

According to USFA, smoke alarms fall under two basic types: ionization and photoelectric.

There are also smoke alarms for people with hearing loss. These alarms may have strobe lights that flash and/or vibrate to alert those who are unable to hear standard smoke alarms when they sound.

You need a smoke alarm in every bedroom, outside each sleeping area, and on every level of your home, including the basement.  Choose interconnected smoke alarms, so when one sounds, they all sound.

Smoke alarms models usually have a lifespan of 8 to 10 years and need to be replaced after that time.

If your smoke alarm goes off while you are cooking, congratulations! This means it’s working! No matter how tempting it may be, do not disconnect the smoke alarm or remove the batteries. You may forget to replace them.

After your smoke alarm is installed and working, you may be eligible for a discount on your home or renters insurance policy. Many insurance companies give discounts for protective devices like smoke and carbon monoxide alarms, fire extinguishers, water detection devices, and burglar alarms.

Hi there! I'm Claudia, the president and founder of McClain Insurance.

I started McClain Insurance in 1977 with a desire to serve others. We've grown dramatically since then, which has provided us the opportunity to give back to the greater Everett community.

My husband, Pat, and I are blessed with two adult children and our granddaughter, Amelie. We love watching live theater performances, traveling, and watching high school crew races coached by our daughter, Caitlin.

Thank you for the opportunity to serve your family!

Next Post: 3 Reasons Why Renters Insurance is More Important than Netflix